In school, we typically learn about the Civil War and emancipation, but Reconstruction—and the period following Reconstruction, when Jim Crow laws passed throughout the South—are typically overlooked. We don’t think about black Americans again until the Civil Rights Era, nearly a century after the Civil War.

The true story of Ida B. Wells takes place over that middle period.

Last night, I listened to this podcast episode about the “Life and Work of Ida B. Wells”. I found quite a few things fascinating, which I talk about below. If you have a spare 30 minutes, the podcast is worth your time. If not, here are a few takeaways and thoughts of my own:

To start, who was Ida B. Wells? 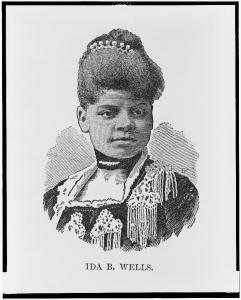 Ida B. Wells was born enslaved but grew up free during Reconstruction. She became a reporter and is known for her tireless work reporting on lynchings of African-Americans during a time when the idealism of Reconstruction fell under the shadow of Jim Crow laws and militant white supremacy.

One of the fascinating things drawn out in this podcast is how she was reporting at the same time that women across the U.S. (especially white women) were campaigning for the right to vote.

There was this cultural notion at the time, called the Cult of True Womanhood, that women were more devout and virtuous than men—and some suffragists were using this idea to support their campaign. Basically, they said politics needed the greater virtue of women to decrease corruption. (Meanwhile, some who were opposed to women’s suffrage used the same idea to say women were too virtuous to be exposed to the corruption and moral degradation of the voting polls; in Colorado, for example, voting was often done at saloons—not an acceptable setting for women of good character.)

Because of this particular place in time, Wells’ reporting on lynching wasn’t well-received by white women who might have otherwise been fairly progressive.

Wells reported these findings frankly, but because of the Cult of True Womanhood, which viewed women as inherently chaste and pure, white suffragists couldn’t embrace her work—and certainly didn’t want to draw attention to it. White women having consensual sex outside of the bonds of marriage would have been damaging to the fight for women’s suffrage.

Also likely at play: Many white suffragists made the point that since black men could now vote, it was in the interest of white people to extend the vote to white women and thus outweigh or negate the votes of black men. But if white women were in romantic relationships with black men, this point wouldn’t stand: It contradicted the idea that white people were united against black people.

These insights are relevant to our present moment. Here’s what I’ll say:

There are always multiple forces at work, but we can’t always see them.

Taking an in-depth look at history, seeing how various movements overlapped and helped/hindered each other, should help us look at our present moment and start identifying what forces might be at work in us.

For example: I grew up in rural upstate New York, which is much more conservative than downstate NY, especially NYC. In response to coronavirus restrictions, I’ve been seeing a lot of complaints about the government limiting liberty that hearken back to words of the Founding Fathers and safety as no legitimate reason for government interference.

It’s not just this current moment that is influencing those sentiments.

Upstate, especially in Central New York (CNY) which is where I grew up, there’s a general low-key resentment toward the New York State government because people feel like downstate concerns—particularly those of NYC—dominate the workings of the government, to the exclusion or the detriment of Upstate’s concerns. The pandemic has only amplified those resentments.

On top of that, much of Upstate New York is economically depressed. A few tourist hotspots (shoutout to Cooperstown) alleviate some of that depression on a seasonal basis, but they’re not enough to actually change the fact that a lot of people are living at or below poverty level with very limited opportunities for economic advancement. (At the same time, the opioid epidemic has taken hold in a lot of locales.)

I think it’s fair to say that the economic depression influences people’s views of the New York State government (which may or may not be responsible for some of that hardship). Both the economic state of things—plus the near certainty that continued shutdown will exacerbate those problems—and the low-lying resentment of the state government are influencing upstaters’ reactions to current pandemic restrictions.

Now, this is not to say that the conclusions people are coming to are completely off-base. I’m not living there right now, and I don’t know enough to have a fully developed opinion. But I think it’s helpful to evaluate what forces might be at work in driving us to our current perspectives/opinions. If we can identify and think through those things, we should be able to come to better informed, more nuanced and thoughtful conclusions, rather than just following our emotions through the most convenient logic.

History is a valuable teacher, but only if we study closely enough.

I know for myself, I’ve never really understood the Civil Rights Era, because I don’t understand when/how/why Jim Crow came to be. We as a nation don’t understand our current state of race relations for the exact same reason.

The murders of Ahmaud Arbery and Breonna Taylor should be disturbing to us, but if we look at history (not to mention the last several years), we’ll understand they are not random events. Those murders are part of a lineage of violence against black Americans that stretches back centuries—and came nowhere near ending with the emancipation of slaves.

This is why we need to delve into the stories of people like Ida B. Wells, Dovey Johnson Roundtree, and other pre-MLK figures who were on the front lines recording injustice, calling it by name, and seeking to right the wrongs of a nation that claims to offer “liberty and justice for all!”

5 thoughts on “A lesson from history and the story of Ida B. Wells”